You are here: Home / Charity football match raises over £700 for local hospitals

A local fundraiser has hosted a special and one-off football match in support of Doncaster and Bassetlaw Teaching Hospitals’ (DBTH) Charity to share his thanks with the NHS for their efforts throughout the past eighteen months.

Speaking about his inspiration for the fundraiser, James said: “I picked Doncaster and Bassetlaw Teaching Hospitals to raise money through a charity football game, which is something I have organised and planned myself and have done so for many years. I wanted to show my appreciation for all the hard work every member of the NHS does each and every day and especially throughout the pandemic.”

James’ initial aim was to raise £600 but since the final whistle has managed to smash this target raising an incredible £721. He continues: “I was so happy we were able to raise all this money for a worthy cause and prior to the game both teams did a one-minute round applause to show our appreciation for the NHS.”

The local football fanatic has organised and hosted charity matches for the last six years in aid of Pancreatic Cancer UK, a charity which is close to him and his family after James’ grandad sadly passed away from the disease.

The teams involved in his special NHS match included his current team New Bohemians FC against his previous club, Swallownest Bethesda FC, with the former running out as 6-1 winners.

Alongside donations, James ran a raffle which he said he couldn’t have done without his partner Ebony Grainger and all the kind donations from a variety of places.

James said: “I just want to say a massive thank you to everyone who helped support the game. To raise all this money it’s certainly made me proud and happy to have done this, I will continue to do these games as I have done this for the past six years and I won’t stop now.”

All of the money raised will be directly reinvested into patient care and treatment at the local hospitals.

Sarah Dunning, Trust Fundraiser at Doncaster and Bassetlaw Teaching Hospitals’ Charity, said: “On behalf of everyone within Team DBTH, I want to say a huge thank you to James, Ebony, the respective football teams and everyone involved for helping make this such a special event. This will make such a difference to our patients, as well as staff.”

If you wish to support Doncaster and Bassetlaw Teaching Hospitals’ Charity, please go to dbth.nhs.uk/charity to download a fundraising pack or email dbth.charity@nhs.net to find out how you can get involved. 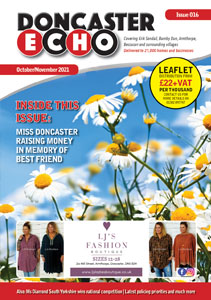 Doncaster man ordered to pay £1,792 after his son dumped waste near Beverley

Land acquired for expansion of development at Doncaster Sheffield Airport