You are here: Home / Chelsea is Bentleys’s Young Slimmer of the Year!

Chelsea is Bentleys’s Young Slimmer of the Year!

Super slimmer Chelsea May Foster is celebrating being crowned Bentley’s Young Slimmer of the Year 2020 after losing 2 stone 5lb in just 20 weeks.

The 21 year-old was awarded the title at her Slimming World group in Bentley, Doncaster, which she attends every week.  The competition celebrates Slimming World’s younger members, recognising 16 to 21 year olds who’ve transformed their lives by adopting healthier eating habits and getting more active.

Recent reports have found that overweight and obese children are more likely to become severely overweight adults and have a higher risk of developing conditions like diabetes and heart disease*, so it’s more important than ever that young people learn about healthy eating and the benefits of being active.

Life was very different for Chelsea just 3 months ago. She was unhappy with her size, her self-confidence was at rock bottom and she felt like the odd one out among her friends. Then in September, Chelsea joined her local Slimming World group at the Catholic Church Hall, Bentley which is run by Becky Clayton, with her sister and began her transformation.

She says: “While I’d been unhappy with my weight for a while, just about to start university and having a baby, I was nervous about joining a slimming club. I felt as though people would judge me for being overweight at such a young age. I shouldn’t have worried though, everyone was really lovely and through the group I’ve made friends with people of all ages.

Chelsea began following Slimming World’s Food Optimising healthy eating plan, which encourages slimmers to fill up on healthy foods and make small changes to the way they shop, cook and eat that make a big difference, like swapping white bread for wholemeal or takeaways for Slimming World-style “fakeaways”.

She says: “I honestly thought I would it would be a fad diet and only be allowed to eat salad, so you can imagine how happy I was when burgers, chips, curries and pasta were still on the menu! I was worried about being hungry all the time, but Food Optimising isn’t like that at all. I never used to think about how food was cooked before, but now I’ve learned so much about healthy eating and I love trying out new recipes and sharing ideas in group.”

Chelsea’s confidence has soared since joining the group and no longer feels like ‘the odd one out’. She says: “Sometimes I used to feel so unfit, grumpy and tired all the time. Now I love hanging out with my mates and I’ve got loads more energy to be more active and since losing the weight so far I have even managed a full game of netball, something I haven’t managed for a while.”

Becky Clayton who runs the group, says: “Everyone in the Bentley groups are so proud of Chelsea. She may be one of the youngest in the group but she’s still a huge inspiration to other members. She’s learned healthy habits that will stay with her for life, so worrying about her weight is definitely a thing of the past.

“Obesity in young people is such a huge problem and it affects how they feel about themselves as well as their physical health. Now Chelsea has the skills to make healthier choices and is much more confident too. I hope she’ll inspire other young people in Doncaster by showing them that there’s no better time to take control of their weight than right now.”

Everyone from the age of 11 upwards is welcome at the Bentley Slimming World groups at the Catholic Church Hall (opposite Herons) every Tuesday at 9am and 11am, and, Wednesday 5pm and 7pm and young people aged 11-15 can attend for free when they’re accompanied by a parent or guardian and have the approval of their GP. Youngsters aged 16-17 years old also receive a discounted rate.  For more information visit www.slimmingworld.co.uk or call Bentley on 07581099075. 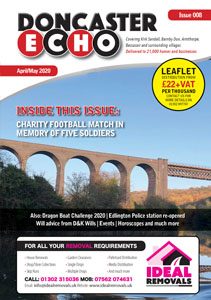 Campaign launches to get Doncaster back to business #DNBacktoBusiness