You are here: Home / Doncaster becomes a city as part of the Jubilee celebrations

As part of the Queen’s Platinum Jubilee celebrations, Doncaster was awarded city status. From Bentley to Bessacarr, Mexborough to Moorends, Stainforth to Sprotbrough and Tickhill to Thorne we all knew that Doncaster would be a unique city, made up of proud communities and made special by the people who live and work here.

Doncaster is one of eight towns to be given the title as part of this year’s Queen’s Platinum Jubilee celebrations.

The town, which has a population of about 311,000 living in its boroughs, had tried and failed three times before to attain city status.

Doncaster grew on the site of a Roman fort of the 1st Century at a crossing of the River Don. It is home to the oldest classic horse race in the world – the St Leger first run in 1776. The race still attracts thousands of people each year. Its industrial heritage was built on coal and rail, with the locomotives Flying Scotsman and Mallard both constructed there. Some famous people born in Doncaster include TV presenter Jeremy Clarkson and musicians Louis Tomlinson and Yungblud.

Doncaster Echo had a chat with some people in the community who run businesses, sports clubs and manage important parts of Doncaster.

Joanne Horgan, owner of Doncaster Untied Carpets, said: “I think now Doncaster has gained that coveted city status, it would be a more attractive prospect for investors, who would in turn funnel money into the local economy. Although I don’t see it as an immediate economic boost it will in time mean more work for local businesses, from trades to digital solutions specialists and other suppliers. In other words, all good things. I also think employment rates will increase, which I think will further benefit Doncaster. Being city status would bring Doncaster a kit of press coverage, commentators discussing the reasons behind the decision, and top political figures discussing what makes the town so culturally and economically viable. This would undoubtedly improve the attractiveness of Doncaster to all sorts of people, and fuel business growth.”

Peter Roswell, from Doncaster Ramblers, added: “We are pleased Doncaster had acquired city status. Our prime objectives are to encourage more people to come out walking with us and second to maintain the 590 public rights of way that we have in the DMBC. If city status allows the council to spend more on green spaces across the region, then Doncaster Ramblers are all in favour.

Di Mellis, Centre Manager at Lakeside Village, commented: “This is absolutely fantastic news. City status will mean than Doncaster is likely to attract more visitors and economic investment. This will be a real boost to the area. We are proud to work with partners across the borough and will continue to offer a great retail experience in the city of Doncaster.

Nick Fletcher MP, commented: “Having spoken in Parliament and lobbied hard for Doncaster to be recognised as a City, you can rightly assume I’m delighted with the outcome. It means we are in the 55 Club. It transforms our status overnight and will help me get increased support from our Government. The only negative is that I can’t say “town centre” anymore when I talk of bringing free parking and additional security patrolling to our City Centre to boost its fortunes.” 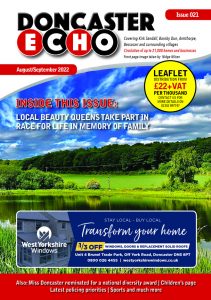